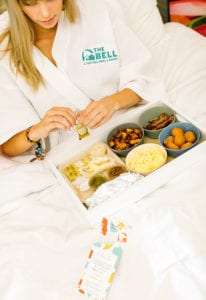 Taco Bell’s legions of diehard supporters have defined what it means to be a brand superfan for years, and from Aug. 8-11, the fast food chain returned the love with an upscale hospitality experience dubbed The Bell: A Taco Bell Hotel & Resort. The activation, which took over an existing hotel in Palm Springs, CA, served as a masterclass in brand loyalty and fan engagement with experiential at its core. There was no new product or program to push—the experience was simply designed to reward superfans and inspire social sharing along the way. And let’s just say fans and invited influencers were more than happy to… taco ’bout it (sorry, we had to).

The branded adventure began at check-in, where attendees (from 21 different states) received a hot sauce packet-inspired room key and complimentary beach towel, and picked up a Baja Blast mocktail garnished with a popsicle. Then it was up to the room, where “The Bell” branding covered every inch of the space, right down to the sauce packet-shaped pillows. Each room featured a mini fridge stocked with complimentary beverages and snacks, Wi-Fi, a flat screen TV and branded toiletries, among amenities. There were also complimentary “food drops” featuring Taco Bell favorites like the Doritos Locos Taco, as well as menu items exclusive to the resort experience, whipped up by the brand’s in-house chef, Rene Pisciotti. Each “drop” was announced via the famous Taco Bell chime.

The rooms, of course, were only one part of the larger-than-life activation. Curated activities abounded. Each morning, attendees were invited to participate in a hot yoga class (on hot sauce packet-inspired yoga mats, of course) and from 2-5 p.m. each day, they could partake in “Happier Hour” at the poolside Baja Bar where popular Taco Bell food items and exclusive drinks were served. During regular hours at the bar, attendees could purchase specialty dishes, like Fire Chip Chilaquiles. Meanwhile, the on-site salon offered Taco Bell-themed fades, braids and manicures.

There was also plenty of time to swim in the “Fire Pool” or lounge on hot sauce packet-shaped floats (are you sensing a theme, here?) while listening to an in-house dj spin tunes. Feed the Beat performances also took place each day. A training camp conducted by the Aqualillies, a professional synchronized swimming team, was also offered to those quick enough to snag a spot. And in a “can’t-make-this-up moment” at the end of the training camp, the instructor asked participants to yell “Aqualillies” on the count of three, which the crowd quickly transformed into chants of “Taco Lilies.” 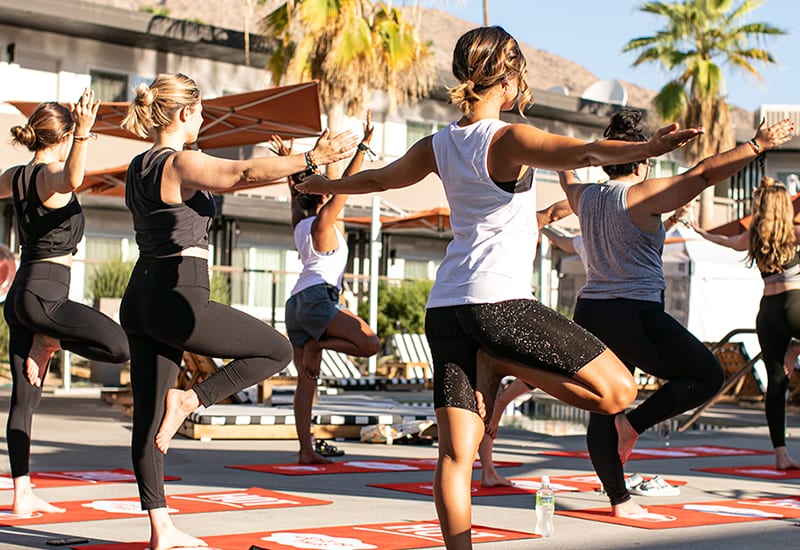 Fans were additionally invited to dive-in movie screenings in the pool, where they could watch films with Taco Bell-heavy references like “Demolition Man” and “Mean Girls,” and munch on complimentary bites. There were also rounds of TACO (the brand’s version of BINGO), with prizes including brand new Xboxes. And to celebrate the 15th anniversary of the Baja Blast, Taco Bell invited fans to experience its “Freeze Room,” which featured air conditioning, multisensory design elements and complimentary Baja Blast Birthday Freeze beverages. Rounding out the key touchpoints was a gift shop selling exclusive merchandise including branded swimsuits and sauce packet-shaped phone chargers.

Unanticipated opportunities for the brand to demonstrate its hospitality chops also presented themselves. When one eco-conscious guest’s metal straw was accidentally thrown away, for instance, Taco Bell sent staffers out to buy her a new one, then had it delivered to her room with a friendly note. And when another attendee complained on social media about a lack of lounge chairs, staffers located him and delivered a seat directly to him.

Check into The Bell Experience:

Then there were the unexpected moments that the attendees themselves incorporated into the experience. Like the mystery fan who painted a series of rocks in Taco Bell branding, posted about them socially and hid them around the hotel. Or the myriad attendees that showed up in self-made, branded costumes, some with their own taco-shaped pool floats in tow. (Bonus: While few fans utilized the service, Taco Bell also offered discounted Lyft rides to attendees who wanted to, ahem, blow the taco stand for any reason.)

“We talk a lot about how we’re already in the hospitality business,” says Jennifer Arnoldt, senior marketing director-retail engagement + experience at Taco Bell. “We have over 7,000 restaurants and we’re growing globally, but we wanted to give our fans a chance to have this elevated experience of hospitality done in a Taco Bell way. Everything from, obviously, the food that we served to the apparel and the merchandise and the music—all these amazing things were for our fans. They were at the root of every single decision that we made.” Agencies: United Entertainment Group, New York City; Edelman, Los Angeles.

Take a Tour of The Bell: